“He saw them straining at the oars, because the wind was against them. Very early in the morning he came toward them walking on the sea and wanted to pass by them. When they saw him walking on the sea, they thought it was a ghost and cried out, because they all saw him and were terrified. Immediately he spoke with them and said, ‘Have courage! It is I. Don’t be afraid.’ Then he got into the boat with them and the wind ceased.“

I’m not a very good swimmer. I can admit that, and while I don’t shy away from it, I also don’t usually plan any long distance swims in open water, just for fun, either! Like a lot of people, there’s something about deep water that just scares the bajebers out of me. It’s unsettling, and when the water is rough as well and I’m struggling to stay afloat, the survival instinct kicks into high gear, creating an emotional state of sheer panic. I think that’s what the disciples must have felt as the wind kicked up and they began to struggle. I can relate to the fear they felt as they struggled with their task. There have been times that I have struggled, too, and to make things worse, right in the middle of it all a storm pops up to add yet another layer of fear and anxiety.

Earlier in the chapter (v. 45) Jesus made his disciples get into the boat and go ahead of him to the other side, to Bethsaida, while he went up to the mountain to pray. He set them to their undertaking. God does this sometimes. He puts us to a task, watching and praying over us from afar as we struggle with it, trying to figure it out on our own, saying “I got this” while He waits for us to realize that the task is given to us so that He may work through us. His purposes are not at all clear to us, catching only small glimpses at times, but His simple request of us is that we yoke ourselves to Him and trust that He’s got this.

This whole tale, as Mark tells it, is a metaphor, an observation about just how difficult it can be to follow Jesus. He sets us in our boat (life) and sends us out into the deep (the world) to accomplish his will. It’s not easy. We push against the oars, struggling with the prevailing winds of popular opinion and “consensus” that surround us with doubt and uncertainty. We become mired in the moment, following fear rather than faith.

Similarly, this same story in Matthew, where Peter tries to walk on water, is also a commentary about how we handle the tasks that God gives us to do. It goes further by illustrating how hard it can be to keep our faith during times of turmoil, even when we know that Jesus is right there in front of us, ready to help as we call out to Him. We still stumble, lose our focus and let the fear of the unknown control our actions as He stands by with outstretched hand. He simply asks us to not only believe in Him, to also believe Him, to keep our faith, to trust, to let Him take control of the yoke that guides us to where He would have us go, all the while telling us, “have courage! Don’t be afraid. I am with you.”

A Prayer: Heavenly Father, Help me to know beyond all doubt that you are there, beside me as I struggle through this life. Give me Your strength, Your courage to move forward without fear. Give me eyes to see Your will for my life and ears to hear Your voice as you whisper, “I am with you.” Amen 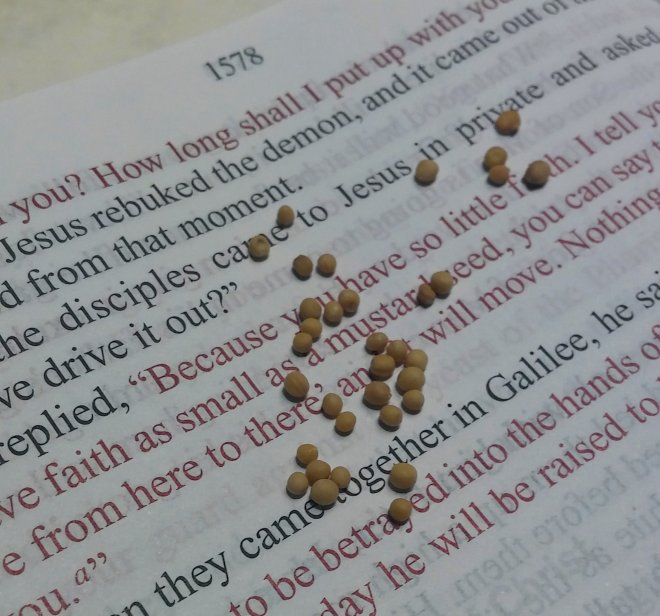 Recently, our Pastor gave a sermon on Matthew 17:14-20. In this story, Jesus is up the mountain with Peter, James and John, and when they come down a man approaches Jesus to ask him to help his son, who is demon possessed. The man had asked the disciples to help, but they could not do it, so Jesus rebuked the unclean spirit, telling it to leave the boy, and it did. The disciples didn’t understand why they were unable to cast it out, so Jesus tells them about a mustard seed.

Our pastor was using these passages in scripture as an example of how faith works. That it only takes the smallest, really almost microscopic, amount of faith to move whatever your mountain, because nothing is too large for God to accomplish. But as he was telling the story, I couldn’t help but think that maybe there was more to the story, maybe it wasn’t just about how faith works, but also about how misplaced faith never works.

In the story, Jesus says, “You unbelieving and perverse generation,” and I love the Contemporary English Version which states, “You people are too stubborn to have any faith.” When he says this, Jesus is not only talking to the people who are continually hounding him for a miracle, but because they ask about why they couldn’t do it, he’s also talking to his disciples. He tells them they have a faith problem, that they “don’t have enough faith,” and that if they had “faith no larger than a mustard seed, they could tell a mountain to move and it would.” A mustard seed is really, really small, and Jesus tells them that they didn’t have even the tiniest bit of faith.

Wait, what? They didn’t have faith the size of a mustard seed? That would be like having no faith at all, and they’d been healing the sick and such all day, so they had to have something, right? It occurred to me right then, what Jesus was alluding to. It wasn’t necessarily that they had no faith, but moreover that their faith was resting in the wrong hands. It was misplaced. They had started to convince themselves that they were the reason the miracles were happening, they got full of themselves, and when they came up against a hard one, they lost sight of God, lost faith and gave up. Their faith in their own abilities had begun to eclipse their faith God’s ability, and because of that, they had no faith.

Whenever we forget about the “one who brought us,” failure is always waiting in the wings.  We lose faith, because we realize that we can’t, and we forget that with and through God, nothing is impossible! That’s why he told them about a mustard seed. Saying look you don’t even need a lot of faith. All you need is faith the size of this small seed, because that small seed, when planed in your heart grows into something much larger than yourself – trust me just this little bit and see where it takes you, and what you are able to accomplish, put your faith in me, instead of in yourselves.

It also got me thinking of Lazarus. Jesus wept for his friend, and just before he called Lazarus out of the tomb, he said a little prayer, he said, “Father I thank you that you have heard me. I knew you always hear me, but I said this on account of  those standing around, that they may believe…” And this, to me, is the most powerful example of faith; a simple prayer that doesn’t ask God if He can, but rather states, “I know You hear, I know You can – thank You.”